We are second year film students at Middlesex, making our final film of the year, 'Life Gnomemore'.

Why are we crowdfunding?

As a group, we’ve been given a maximum that we’re allowed to invest personally into the making of our film. Sadly, for an eight to ten minute film we need considerably more than this budget. The only way we can currently raise the rest is through a crowdfunder.

Toby wakes in a waiting room surrounded by various fatally injured people. He has a numbered ticket in his hand. He converses with the man next to him (who has a knife sticking out of his chest). He is called into the table of Ms. Reaper, who informs him his surplus of sins means he can either wait it out (1000 years), to get to heaven - or return and absolve a sin.

She suggests a quick one, which involves returning the gnome he stole from his neighbour as a child. Toby decides to take the quick route, but he returns and discovers his neighbour died the same day as him. This revelation comes about following his meeting with the neighbour's granddaughter (and Toby’s childhood friend). Looking for another way to redeem himself, he attends the funeral of the neighbour. At the church he knocks a statue and looking for a replacement uses the gnome.

Having found the solution, mid-ceremony Toby disappears in a flash of light and finds himself at the reception of the high end, modern Hotel Nirvana. He checks in at the front desk, however whilst doing so is informed the hotel doesn’t have WiFi as it was a creation of Satan himself.

If we hit our minimum target of £75, we will use the £200 we are allowed to invest personally on our two main locations (the church and waiting room) and the £75 we raise from our crowdfunding campaign to cover the costs of basic props, actors expenses and food on set.

If we are able to raise our full target, we will use the money as follows: 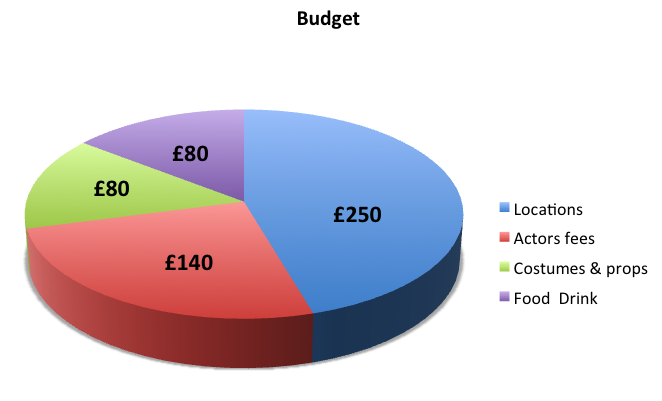 £250 - Locations: This would allow us to cover the cost of our key locations so we can then use our £200 personal investment as a contingency fund. This would mean that if we desperately need a location for two more hours for example, or to pay actors for re-shoots, we have the money to hand. We would also put £50 towards additional locations that help create the right atmosphere for our film, as opposed to using the variety of rooms at uni (which would be less than ideal!).

£140 - actors fees: We would like to recognise the contribution of our actors and pay them a small fee of £20 per day. Between our three cast members, this would break down as follows:

£80 - costumes and props: This would cover the costs of additional costumes and props that we can't find in our university costume store, thereby improving the visual impact of our film. It will also ensure we have enough for any props that are likely to need replacing while filming (some will get destroyed during the shoot).

£80 -  Food and drink for cast and crew: This would be for the duration of our four-day shoot. What we are able to provide will depend on what we raise but it is likely to be a variety of sandwiches, crisps, fruit and drinks (and hopefully with some hot food if we have enough money raised!).

We will be able to pay for things such as VFX rather than trying to talk people into getting these done for free!

We will also be able to secure existing locations for longer periods of time, giving us a better chance of achieving our end goal. Our locations cost from £14 to £20 per hour, so the more we raise the better. Our two key locations are costing us £100 each for the minimum of five hours we need alone,  so any additional funds can be used to extend this time if needed. We would also put any overfunding towards the costs of additional locations rather than using the green screen - which although suitable, isn’t ideal.

Additionally, overfunding would give us a larger contingency fund if anything goes wrong and we need to re-film, re-record sound, or re-shoot at a location. It might also mean we are able to provide hot food on set, and get all the costumes and props we would like to get if money were no object!

We will aim to update with every new turn on this website, however there will be at least one weekly update (likely more), so everyone contributing knows how the project is progressing.

Updates will be provided on the alpha films Facebook page .

The first ten donations over £25 will receive an Alpha Films tote bag (either posted or given in person - by the end of May at the latest). Also on offer is the clapperboard used for the production as well as some other treats! Check out the right hand side of our page to find out more about the rewards we have on offer.

Even if you can't donate, you can still help us by sharing our crowdfunding page with anybody who you think would be interested in our film project. Obviously, if you are able to give a small amount of money too, we would be vert grateful to you!

A special thanks (named) in the credits

A signed copy (by cast and crew) of the Life Gnomemore Script! AND a named thanks in the credits

Run a company? Have an A5 poster you want seen in the film? You could see your companies flyer on the desk of the stern Ms Reaper. *Nothing hugely offensive please, it will be checked beforehand!

The clapperboard we use for the film (written on or not if you prefer!) - Approximately A5 sized black chalkboard clapper. If we know you in person, we will give it to you, otherwise it will be posted after the film.