Max O, needs your help to take his place at Italia Conti...

Can Max O be the next Eddie Redmayne? Maybe, but he'll need your help

So...I've always loved acting and appeared in loads of productions at school and local groups, but the aim is to do this professionally. I may as well have decided to be an astronaut, I know!

I don't want to be an actor for the money, let me make that clear! It would be nice, don't get me wrong, but I want to do this because I love it, not because I want  fame and fortune and everything that goes with it!

My journey needs to start by getting into the best drama school I can and so I auditioned this year for 5 different famous acting academies to do a BA 3 year acting degree. There are usually in excess of 1500 applications for each course and only 25 places for each, and...

I've been offered a place on the 1 year foundation course at the world famous Italia Conti Academy - Bugger me that's exciting! 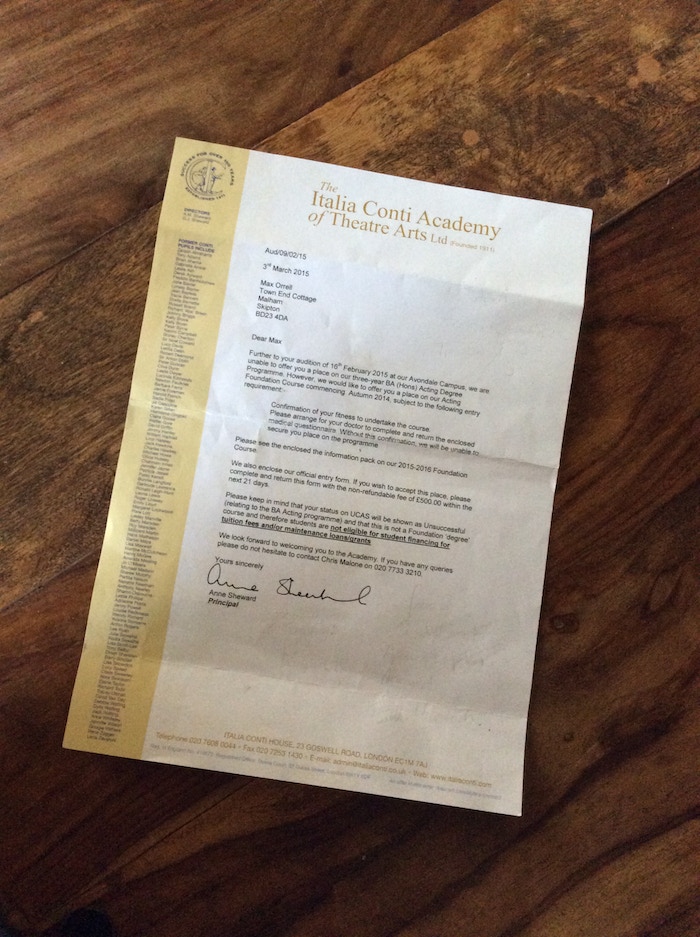 The lady from Conti, she said yes....

Small problem - I need £16,000 for the fees, accommodation and to live and just don't have it. As it's a foundation course there is no student funding available, so I'm on my own. I have a wonderful mum and dad who support me in everything I do, but despite having a pretty good jobs, they don't have £16k hanging about - bloody hell, who does!

Only posh kids can afford to go into acting...

“I’m constantly looking round for actors who can convincingly portray working-class men,” said McGovern. “They’re getting fewer and fewer because it’s only the posh ones who can afford to go into acting.”    Jimmy McGovern

There's a lot of talk about the type of kids that can afford to go to the best drama schools. Julie Walters, David Morrissey and Kevin Spacey have all recognised how difficult it is. If I can't get a leg up, this opportunity will drift away and that would be gutting. Hopefully, this is where you come in -

My fees for the course are £8500 (including admin fee) and I'll need to pay that on day one. If I can raise this as a minimum amount, at least I can say yes and start on my long road to becoming a professional actor.

I'll need to find somewhere to live in Clapham, London and that's not going to be cheap. I'll probably have to pay monthly rent of around £550 per month and I'll be there for ten months from September 2015 until June 2016. If I can raise some more, I'll be able to pay my rent for the year and feed myself - Pot Noodle and Beans only!

Support me while I train, do my foundation course and hopefully the degree course after that and when I'm done, I'll reward you with signed pictures, personalised thank-you letters and who knows, if i make it you could be the one that got me there!

The biggest remaining question is, can I act?

I've had a little formal training during my performing arts A-level, so I'm very much a work in progress. See what you think, this is my Angelo from Shakespeare's Measure for Measure

Regular Updates on my progress...

I'll update you every month during my course with a progress e-mail and keep you posted with any acting jobs, shows and obviously any big breaks that come along

I'm committed to my dream

I'll work hard, never give up and if it all works out and I end up as a professional actor, you'll be able to say that you made it possible with your generous support.The return on your investment is probably going to be more emotional than financial, but I promise I'll do my best and do everything to make that first paid acting job something we can all be proud of.

My Digital Bow. Support me with a fiver and I'll send you a personal video Thank You via Youtube from my first day at Italia Conti. Help me and I'll share the excitement of my first day with you!

Support me with a £25 and I'll send you a personal letter and a signed photo, my thank-you for your help in getting me started.

Support me with £75 and together we'll celebrate the end of my first year at Italia Conti with a picnic in my home, the beautiful Yorkshire Dales. We'll all share food, drink and hopefully good weather and I can tell you all about my exciting year!

One Night Only... Support me with over £250 and I'll invite you to join me and my family for an exclusive outdoor performance in Malham in the beautiful Yorkshire Dales. I'll put on an exclusive performance with friends in one of Malham's famous attractions, I'll even let you choose the play. This is a lot of money and I'd really want to thank you for your support with a night to remember.