After my audition in November 2015, I was absolutely thrilled to hear the same day that I had been given a place at the university I wanted. Now a year later, I have already completed four months of jazz study at the Guildhall School of Music and Drama, and already from these four months, two main things have become even clearer to me than before: Firstly, that I love jazz, and secondly, that London is very expensive.

I have launched this Crowdfunding project in the hope that I may receive support with completing my education here at the Guildhall. Whilst I have been accepted to study for four years, the expense of living here makes the prospect of continuing my studies in London a difficult one.

The tuition fee has been raised to £9,250 a year and the accomodation is £6,000 a year. Together, this is around £15,000, which does not include additional living costs, such as food and other essentials (which all seem to be twice the price in London than anywhere else in the UK!).

Any donations received through this project will go towards covering the tuition fee, and if any extra, towards additional costs (accomodation, books for my studies, etc...) as well.

I have been studying Jazz piano and singing since the age of seven. My father, an African American blues musician, has influenced my passion for music greatly, introducing me to soul singers, such as Bobby Womack, Jackie Wilson and Nina Simone, as well as jazz greats like Horace Silver (now my greatest influence).

When I was twelve, my father took me to a recording studio to record my version of Nina Simone's 'Nobody's Fault But Mine', and two Horace Silver tunes, including 'Song For My Father'. After this experience, I knew that I wanted to be a recording artist in the future.

Three years later, I was put in touch with a singer with whom I cowrote three songs, and recorded my first EP, Hooked On Love. 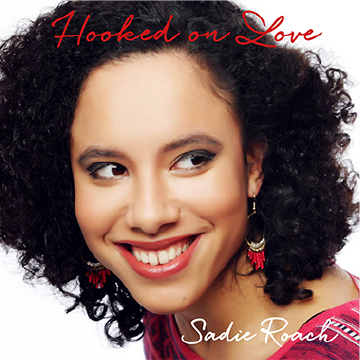 WHAT I HOPE FOR THE FUTURE

After I complete the Jazz course at the Guildhall, I hope to continue a career as a professional working musician. I would like to produce my first album and finally share with you all the many songs I have written over the months and years! Already, Guildhall has taught me so much that will hopefully get me a step closer to this dream, and I know there is still so much more to learn.

If you wish to help, no matter how small the amount you pledge, I would be very thankful.

Those who pledge a donation over £25, will receive a signed copy of my EP, Hooked On Love .

If you want to help but can’t give money please share this project with anyone you think would support me– on Twitter, Facebook, LinkedIn, by email, telephone or in a chat over the fence!

A letter of thanks from Sadie

A letter of thanks and a signed copy of Sadie's EP, Hooked On Love

Signed copy of Sadie's EP, Hooked On Love, and a monthly newsletter to update you on how Sadie's getting on at the Guildhall