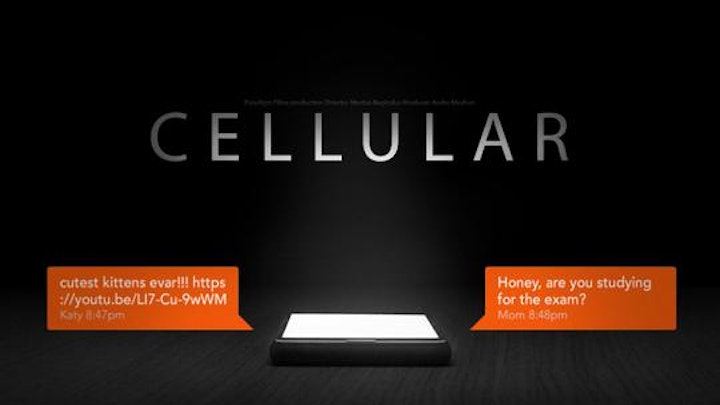 We are third year Middlesex University Film Students in the process of making our final year dissertation film titled; Cellular. Written & Directed by Mantas Beginaskas and Produced by Andre Meehan which is due for release in mid 2016.

Brief Synopsis of the Film:

'A speculative fictional social-realism dystopian drama about smartphone addiction and its role in a young individuals life. The story undertakes a young teens' journey to facing an addiction, its consequences and questioning the concept of a smartphone'.

This story is one which we think is highly relevant in many ways. Everyone has, in some shape or form a dependancy on technology especially the use of smartphones. Creating a world where everyone is connected by single device so much so that it evolves into an extension of our real selves. What affect does this have on people's lives, their individuality and to what extent can we consider this concept in a young persons life? Our purpose is to tell a simple and subjective story that hopefully changes peoples ideas or opinions on what this is doing to us on a wider scale as a society through the lenses of one teen, her mother and the people around her.

So, how connected are we really?

Why do we need donations?

Raising money will allow us to take care of the most important parts of the film, this includes;

We have set this campaign at £850 to cover these basic needs as well as covering other essentials such as catering, transportation and to make sure we can fulfil our rewards benefits to our donors.

We are appealing to friends, family, film lovers and anyone who is interested in this project to help and support us on our journey. So if you've never supported a project of this kind before, now is your chance!

our plan of action?

We are currently in pre-production stages with principle photography starting during the first week of February 2016.

We want this film to reach as many people as possible not only because we believe in its success but most importantly this short film will form part of our creative portfolios when entering into the Film Industry so we need all the help and support we can get.

We will also be working with Middlesex University Business and Media students to help us promote this film in the best possible way which will cut our costs by utilising our marketing resources.

The rewards are listed on the right and give details for each donation bracket. Different level of donations grant different level of rewards so think carefully before donating. All donors will have a credit in the film depending on what you have donated.

We will be holding a private screening when the film is released. Details of this will be updated in 2016 with venue location and capacity information.

If you can't donate or do not feel like this project is something you would like to help fund then you can always help spread the word about our campaign by sharing this campaign link, by visiting our website http://cellularshortfilm.businesscatalyst.com  and by following us on Facebook https://www.facebook.com/Cellular-Short-Film-1687730531441920.

Special 'Thank you' letter with sponsor credit in film, link to online private viewing of the finished film and an invitation to free screening.

Special 'Thank you' letter with sponsor credit in film, Blu Ray or standard DVD of film, limited edition A2 film poster and invitation to free screening.

Special 'Thank you' letter with sponsor credit in film, full production magazine/booklet of the film from start to finish, A2 limited edition film poster, Blu Ray or standard DVD of film and invitation to free screening.

Executive Producer Credit, full production magazine/booklet of the film from start to finish, limited edition A2 film poster, Blu Ray or standard DVD of film and invitation to free screening.