I am an international sprinter looking for sponsorship to help me qualify for London 2012. 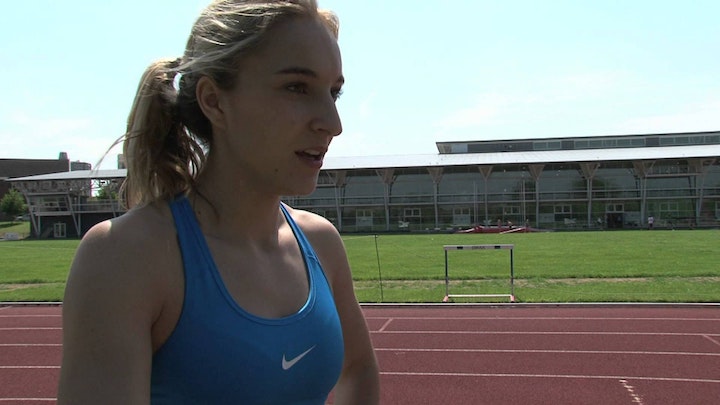 I am 20 years old and already one of the top female British sprinters.

I achieved 3 A’s at A Level in Maths, Biology and Sport Studies while at Bristol Grammar School. I am now studying for a BSc in Sport and Exercise Science at Loughborough University while also studying for a level 3 diploma in Sports massage.

An interview with me during the 2011 season:

What I have achieved so far in athletics:

I have competed for Great Britain on several occasions with the highlights being the World Junior Championships which took place in Moncton, Canada in 2010, and the World Student Games in China 2011.

My achievements so far have been predominantly in the 200m. I finished 6th in the World Junior Championships in 2010 and then went on to finish 8th in the World Student Games in 2011. I was the youngest athlete in the final in China and will still be eligible to compete in these championships for the next 3 years.

In 2011, I was also selected to compete for Great Britain in the European U23 Championships in Ostrava, Czech Republic. However with a frustrating season full of injuries, I was unable to fulfill my potential of gaining an individual medal in the 200m, but was part of the 4x100m relay team which won the bronze medal.

At the end of the 2011 season, I am already a member of the senior Great Britain 4x100m relay squad and am only 0.3 seconds off the Olympic 200m qualifying time. With a superb 400m relay leg in China, I also have the potential to qualify for London in the 4x400m relay and/or the individual 400m event.

I am currently balancing my studies while training for the London 2012 Olympics under the guidance of Commonwealth and European gold medalist, Jared Deacon.

A video of me training and competing:

What I aim to achieve in the future:

Great Britain have several strong athletes also fighting for these positions, so I have been training very hard over the winter to make sure I stay injury free in order to give me the best opportunity for selection.

Why I need sponsorship?

In order to reach my goal of competing for team GB in the London 2012 Olympics and beyond, I have two main requirements.

It can be very expensive for top athletes to compete even in the UK. Expenses include train fares, petrol and hotel reservations. In order to save money, I often have to drive for several hours on the day of competition. This causes my muscles to tighten and drains me of energy. With sponsorship money, I would be able to afford to stay in hotels the night before competitions which would increase my chances of performing at my best.

I would like to be able to compete in the following competitions during 2012:

Competitions therefore include a lot of travel and I currently cannot afford to stay in hotels. I also compete in competitions abroad. However, I am currently limited to only a small number due to the high cost of travel and accommodation. Ideally I would like to compete in the highest rated competitions all over Europe, and with sponsorship money I would be able to do this. These events in Europe are called the ‘EAP Circuit’. Top athletes from across the world travel to compete in these meetings and I need to be able to test myself against some of the best athletes from other countries. These competitions would also give me a good opportunity to race, mix and learn from older, more experienced athletes.The EAP circuit have several competitions in Switzerland, France, Belgium, Sweden, Italy and the Netherlands.

I put my body under exceptional stress during each training session and it is important that i look after it and help recover as effectively as I can. This requires physiotherapy sessions, sports massage, ice baths and specific rehabilitation exercises. It is important for top athletes to have at least one sports massage session a week to prevent muscles becoming excessively tight. This then prevents training for a few days due to the increased risk of pulling a muscle. Each physiotherapy and/or sport massage treatment costs up to £40 an hour.

It is essential that i do rehabilitation and other exercises at home in between training sessions. This involves buying equipment that can cost up to £100 for each item.

With your sponsorship money I will be able to afford this essential treatment and equipment to keep my body in optimal condition and prevent injury.

1st reward + signed program from an event I have competed in

3rd reward + a ticket for a competition I am competing in

5th reward + use of my name/image for company promotional material