Nanomedicine Lab scientists volunteer to Stop the Plastics and #HugTheWhale

We are raising £26,400 to volunteer in a three week scientific expedition which will research and preserve Mediterranean Sperm Whales and send a strong message to Stop the Plastic that is poisoning our oceans, ending up in your meals and killing our gentle sea giants!

We are The Nanomedicine Lab at The University of Manchester. We are a group of over 30 scientists, engineers and research support staff, who are studying how nano-sized technologies made of different materials, such as gold, carbon and lipids can be used in the diagnosis and treatment of human debilitating diseases of the brain, such as cancer, neurodegeneration (Parkinson’s, Alzheimer’s), stroke and epilepsy.

We (Luis, Jess, Michelle, Thembi and Kostas) will sacrifice our summer holidays this year to volunteer for the NanoWhale expedition run by The Pelagos Cetacean Research Institute. We’ll act as the assistants of our marine biology colleagues in researching and conserving endangered Mediterranean Sperm Whales.

To do this, we need your support! Let us involve you before, during and after our expedition!

What are we doing and why?

The serious implications from the accumulation of plastics in our oceans is gradually becoming recognised more widely. Almost daily, mass media feature different angles of the problem. Even the deepest vessel dive ever recorded in the Mariana Trench in the Pacific recently found… plastic bags! 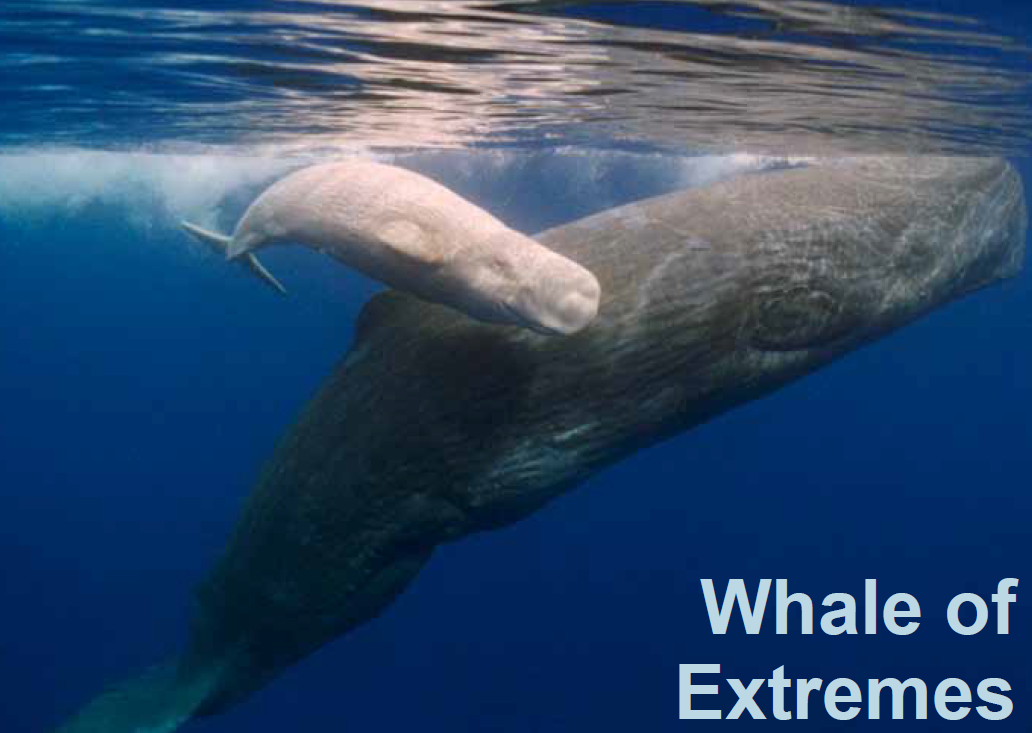 Our oceans are becoming the wasteland of our plastic-based consumerism with tremendous implications. The Mediterranean Sea is particularly vulnerable to turn into a toxic wasteland, since it is the most heavily populated and vessel-trafficked closed sea basin in the world.

One of the most acute catastrophic consequences of the human-caused ocean plastics accumulation is the health impact on the species inhabiting our oceans. The largest, most intelligent, communicable, socially complex and long-living such species are cetaceans, and of those, sperm whales sit at the top of the pyramid. It is not widely known, but there are genetically distinct sperm whales slightly smaller than the oceanic ones (reaching in size 16 meters long and some 35 tons in weight) permanently inhabiting the Mediterranean Sea and isolated from their genetic cousins in the Atlantic Ocean.

Numerous and increasing numbers of strandings of those sea giants indicate that even small micro plastics in the ocean accumulate in their gastric system leading to a slow and undeserved death from starvation and dehydration.

To highlight the problem further, here is an aerial photograph showing the total amount of plastic debris found in the stomach content of just one young sperm whale laid on a tennis court. Two scientists of the Pelagos Cetacean Research Institute (171 cm tall each) are used as scale bars. 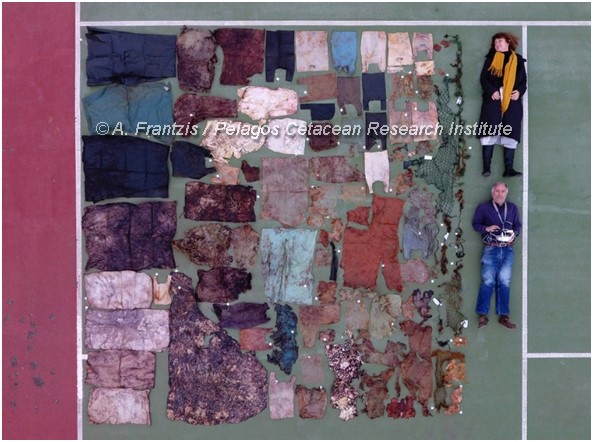 We, the nano-scientists and nano-engineers designing technologies to improve human health at the smallest of scale at the Nanomedicine Lab of The University of Manchester, want to make an effort and contribute to a call for action for our sea creatures of the largest of scales! In doing so, we want to raise awareness of the broader problem of our oceans being filled with plastics.

This summer, we will support and volunteer with The Pelagos Cetacean Research Institute for the study and conservation of these endangered Mediterranean sperm whales. The NanoWhale project is a scientific expedition with the aims of whale conservation and ocean environmental protection. During this expedition we will localise, eco-locate and photo-identify whales across the Hellenic Trench, the deepest area of the Mediterranean Sea, to understand the threats they face, and help shape the laws which can protect these animals. We believe that small (Nano) actions can have huge impact and now is the time to act!

The Pelagos Cetacean Research Institute is a scientific, non-profit organisation active during the last two decades, whose goal is the study and conservation of cetaceans. Pelagos conducts scientific research and coordinates initiatives to protect whales, dolphins, and porpoises and their habitats from all sources of disturbance: chemical pollution, noise pollution, ship-strikes, accidental capture and injury, overfishing and, of course, plastic pollution in the Mediterranean Sea and further afield. Some of their scientific findings have travelled across the world through renowned media outlets, such as the BBC, CNN, TIME, The Times, Guardian, Economist, National Geographic and many others.

In practical terms, we, the Nanomedicine Lab volunteers along with The Pelagos Cetacean Research Institute researchers and one skipper will run the project for three weeks, with two volunteering teams changing over for two expeditions of ten days each. This will give you a flavour of what we’ll be going on board:

Why is this important to us?

This action is very important to us, particularly as scientists.

Why should it be important to you? What impact will you have by giving your money?

This is really about:

Your money will allow us, the Nanomedicine Lab scientists, to volunteer to protect our largest species and our oceans, and to produce scientific data to lobby our politicians with.

Where will your donation go?

Your donation will be used to cover the costs of the three-week scientific expedition that will see us sailing across the deepest waters of the Mediterranean trench.

The minimum fundraising amount (£10,300) has been set to allow the funding of at least a ten day expedition. The costs to be covered include:

If the full target (£24,600) is reached, the expedition will be extended to three weeks (20 days) and the Nanomedicine Lab volunteers will participate in two teams changing over after the first ten days of studies in the sea. As such, the above costs will be doubled. The travel costs and insurance of the volunteers will also be covered:

In the event that we will raise more than our target, we will use the funds to create props, flyers and banners with which to organise outreach activities to secondary schools around Manchester communicating our experience from the expedition, it's outcomes and the importance to Stop the Plastics and Save our Oceans.

We will be providing daily updates throughout the campaign on the this page and also on our Twitter.

Hey, we have some fab rewards to thank everyone who donates, whatever the amount you might give. Check them out.

And we know we said you don't need to give money to help us, but we'd love it if you did! We're asking you to make a donation, no matter how small (nano) or mega (whale-size), to help us fund this scientific expedition to perform research into the dangers faced by the remaining Mediterranean Sperm Whales.

Please sponsor us and help make this happen!

We will email you a photograph of the whales from the expedition as we track their dives! #HugTheWhale

We will email you a video of the sea mammals we meet and study from the expedition! #HugTheWhale

We will create a personalised video for you with a video-dairy from some of our volunteers and send you (by email or shared link) on completion of the expedition! #HugTheWhale

We will run an Open Day @ the Nanomedicine Lab in Manchester so that you get to meet the volunteers from the expedition - date TBC. We will tour you around the facilities, show you how we live and do research every day and explain what it means to be a nano-scientist, exploring the nanoscale! Travel and/or accommodation costs will not be covered. #HugTheWhale

Any person, company, institution or corporation that donates towards the NanoWhale project this amount, will have their name or logo printed on the T-shirts that we will wear during the expedition, and a banner with all the sponsors will be carried on the expedition boat at all times. We will email you photos and videos featuring your logo during the expedition. #HugTheWhale

Matchfunding is where you commit to giving £1 for every £1 donated by others. This project is looking for people who would like to make this commitment. You can cap your match amount, and your name or brand will be displayed to everyone who gives to the project. To find out more, please fill out the form and we will be back in touch! If you know anyone who might be interested, please do pass this on to them.