Why should we research mathematical abilities in ASD?

There are about 600,000 people with Autism Spectrum Disorders (ASD) in the UK (Buescher et al., 2014). So far, mathematical abilities in ASD have not been the focus of research. Yet, our pilot study shows that most children with ASD have weaker mathematical abilities than their typically developing peers, in contrast to common belief. What we don’t know yet is what the underlying causes of these mathematical difficulties are.

I am raising £11,571 to investigate the development of mathematical abilities in children with ASD. Here is why I think this investigation is important.

For children with ASD

1) A better understanding of what causes mathematical difficulties in children with ASD will allow us to design effective educational tools and programs for young children, which is crucial as a growing number of children with ASD attends mainstream schools.

3) Changing the preconception that individuals with ASD have superior mathematical abilities will lead to fairer expectations from society towards the ASD population.

My supervisor and I believe that providing further understanding on how mathematical abilities develop in an atypical population such as the ASD population will give us some clues about the mechanism that underlies the development of mathematical skills in the typical population (Van Herwegen, J., & Karmiloff-Smith, A., 2015). This would extend the impact of this research even further!

My name is Erica and I would like to start my PhD at Kingston University under the supervision of Dr Jo Van Herwegen, an expert in language and number development in both typical and atypical population.

My research interests focus on how mathematical abilities develop in typical and atypical population. I recently took part in a workshop on Numerical Cognition in Tübingen where I presented my PhD project. I am also in the process of writing a review paper about the empirical studies that analyzed mathematical abilities in the ASD population so far. The review highlights the gaps and the inconsistencies in literature and shows that it is still unclear if and how mathematics is a savant skill for individuals with ASD.

During the last year I have been working as research assistant on a project that investigates preschoolers' number foundations in typical population and this experience has had a great influence on my career development.

The project in detail

I will assess the abilities of these children again 9 months later to examine the progress they have made on the same tasks. I will then compare their performance to typically developing children matched for non-verbal abilities.

This will give us both longitudinal and cross-sectional data that we can use as a starting point for further investigations and as a guideline for designing an effective educational tool.

What's the money for?

In order for me to start this project, I need to secure enough funds to pay my university fees as well as my training courses and research related costs. Here is the list of all the costs. 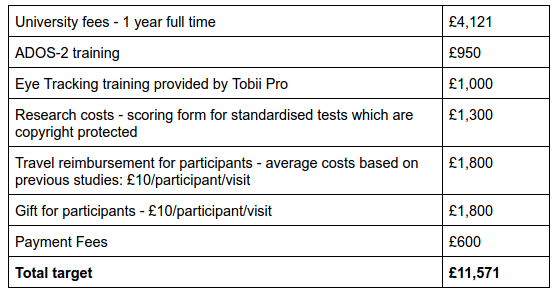 I set the minimum target to £4,121 as that would cover for the university tuition fees. The next thing in line is the ADOS training, that will allow me to diagnose people with ASD during my PhD and to gain a better understanding of the clinical field.\

Also, have a look at my supervisor’s website to get updates about all the researches in progress.

In fact, share it with everyone you know as we think it's a great idea, and the more people know about it, the more likely we are to make this work out brilliantly.

Social Thank You - Hugs, thanks, tweets and Facebook tribute posts to your generosity from the staff.

Personal thank you - A personalised video from the staff saying a big thanks to you.

Welcome to the family - A unique hand written postcard - thank you signed by the participants of the project + a personalised video from the staff saying a big thanks to you.

Philanthropist - A signed copy of the first publication resulting from the project + a unique hand written postcard - thank you signed by the participants of the project.

Explorer - A day in the lab taking a closer look to the testing tools and techniques we use at Kingston University, London.

Gold Sponsor - Your name / company will be listed as a funding body in the acknowledgements of my PhD dissertation.

Platinum Sponsor - Your name / company will be listed as a funding body in the acknowledgements of my PhD dissertation and in any publication resulting from the project.