A small step to create a conscious multilingual and multicultural society 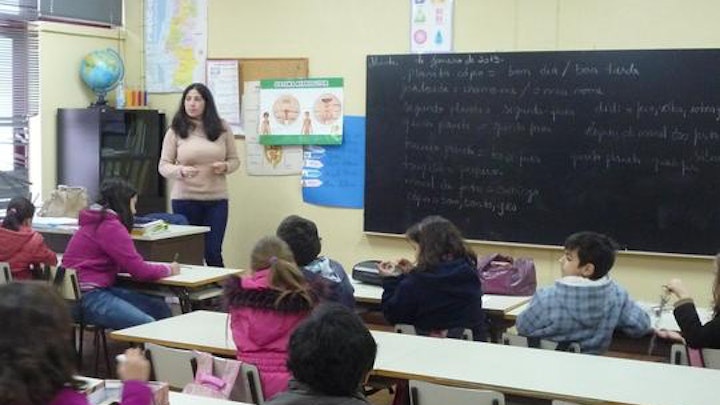 WHAT'S THE PROJECT ABOUT?

I am trying to raise €12,000 for activities concerning the revitalization of Minderico (an endangered language spoken in Minde, Portugal), mainly its implementation at the local school.

Almost half of the 7,000 languages spoken around the world is in danger of disappearing in about one generation. Many of them haven't been documented until now. There is an urgent need to describe and document as many languages as we can, not only to provide future linguists and researchers in adjacent disciplines with as full a body of data as possible, but – more importantly – to preserve for the whole of humankind the invaluable cultural wealth and indigenous knowledge they contain, by collaborating with the speech communities in the revitalization of their languages and their adaptation to the new challenges in our everyday life. In general there is a strong tendency to learn and use only the major languages such as English, Spanish, German, French, Portuguese, etc., especially in electronic communication.The goal of this project is to turn that process in exactly the other direction by giving the school kids the possibility to get to know and learn an endangered language (the language of their ancestors), its cultural richness and identitary power and by making them aware of the linguistic diversity and the importance of balanced multilingualism.

This project focus on Minderio (ISO code /drc/) which is an Ibero-Romance highly endangered language spoken in Minde (Portugal) by a community of 150 active speakers and 1000 passive speakers (those who understand the language but don't speak it). Minderico emerged in the 17th century as a secret language, the language of the wool carders and merchants of the famous blankets of Minde.

(Production of the traditional blankets of Minde)

Contrary to what normally happens to secret languages, Minderico extended to all social groups in Minde and became the main means of communication in the village. In this process, Minderico enlarged its vocabulary as well as its scope of application (Minderico was used in every context of daily life) and turned into a full-fledged language with a very characteristic prosody and a complex morphosyntax - though rare, this is not an unknown phenomenon in the languages of the world, but one that emphasizes the linguistic and cultural importance of Minderico!

Today, Minderico risks becoming extint more than ever before in its history. The intergenerational transmission has been interrupted - the younger generation is not learning the language at home anymore and it has no opportunity to learn it at school; the number of speakers decreased considerably in the last 40 years (also due to the decline in the population of the village as a consequence of the crisis in the textile industry); the language lost its scope of application, being now used only in familiar contexts (with family and friends), since Portuguese is the language of administration, education, economy, media, etc. If we add to this description the fact that Minderico is not officially recognized in Portugal as a language or as an endangered linguistic variety and thus it is not (financially) supported by the national or local authorities, its future becomes even more critical. The non-recognition is also an obstacle for the presence of Minderico at the local school.

This project represents an important step to change the current situation and to strengthen the presence of Minderico at the local school and in the community. The revitalization of a language can only succeed, if you are able to involve the whole speech community (not only an elite) and to motivate the younger generation for the language, bringing it to their daily life.

We believe that the future of Minderico depends on the younger generation. Since Minderico is not recognized as an official language, its presence at school is inexistant or very limited. It cannot belog to the school curriculum as an autonomous subject. But, in the year 2013 and 2014, I, together with Rita Pedro (a member of the speech community), offered voluntarly Minderico as an optional class at the local school. It was only a pilot project to check the interest of the kids and their parents. The feedback was overwhelming and we were able to teach more than 40 pupils between 6 and 12 years old.

In order to continue this project and implement Minderico at the local school in a comprehensive, responsible and successful way, contributing decisively for its revitalization, we need to:

The project will start in September 2015, with the next school year, and will last one year (until September 2016).

The accomplishment of these tasks is only possible with your support! By supporting this project you are helping to maintain language and cultural diversity in our globalized society!

My name is Vera Ferreira. I am a linguist, founder of CIDLeS - Interdisciplinary Centre of Social and Language Documentation and head of its Language Documentation and Language Typology working group. I am involved in several projects focusing on the documentation and study of minority/endangered languages in Europe. I hold seminars and workshops on language documentation, fieldwork, endangered languages and language typology.
Since 2000 I am working on Minderico. Its documentation, study, revitalization and strengthening in everyday communication have been the main focus of my research. Between 2008 and 2012 I was resposible for the documentation of the language in everyday communication and initiated sereval revitalization projects together with the community. In 2014 I, together with Peter Bouda and Ricardo Filipe, developed a vocabulary trainer for Minderico (WordByWord) - a project financed by the Foundation for Endangered Languages. Between 2011 and 2015 I was the head of the project "Dicionário Bilingue Piação - Português", which was released in May 2015. It is the first dictionary of Minderico and a valuable tool for its study and revitalization. Apart form Minderico, I've been working also on the documentation of Bavarian (Germany) and Fala (Spain).

Every amount above the full target will allows us to guarantee the maintenance of the project in the following years and to develop more revitalization activities in other domains of daily life (cinema, music, theater, literature, etc.), involving young and older generations.

We have some great rewards to thank everyone who donates, whatever the amount you might give. Check them out.

Learn more about Minderico and the Work on the language

(Scene of the first short film in Minderico - A Cabiçalva)

(People praying in Minderico at main church in Minde)

You can also help us by sharing this project with anyone you think would support us – on Twitter, Facebook, LinkedIn, by email, telephone, in a chat over the fence or on your blog. But of course, if you can sponsor us it will really help to make this happen.
Completed
Share

"Thank you" postcard of Minde signed by the team

A traditional song in Minderico performed by a local group

All of the above, personal "thank you" in the acknowledgments of the children's book and a t-shirt of the project