The University of York Solar System

Bring the planets down to Earth!

This is just another quick update to tide you over as the final installation date gets nearer! We headed over to North Yorkshire Props Department in Scarborough this weekend to catch up with the wonderful team who have been put so much hard work into building the planets for us over the last few months.

They are now halfway through painting the planets and we thought we'd share a picture of Earth midway through the process, just so you can get a bit of how the final models will look! 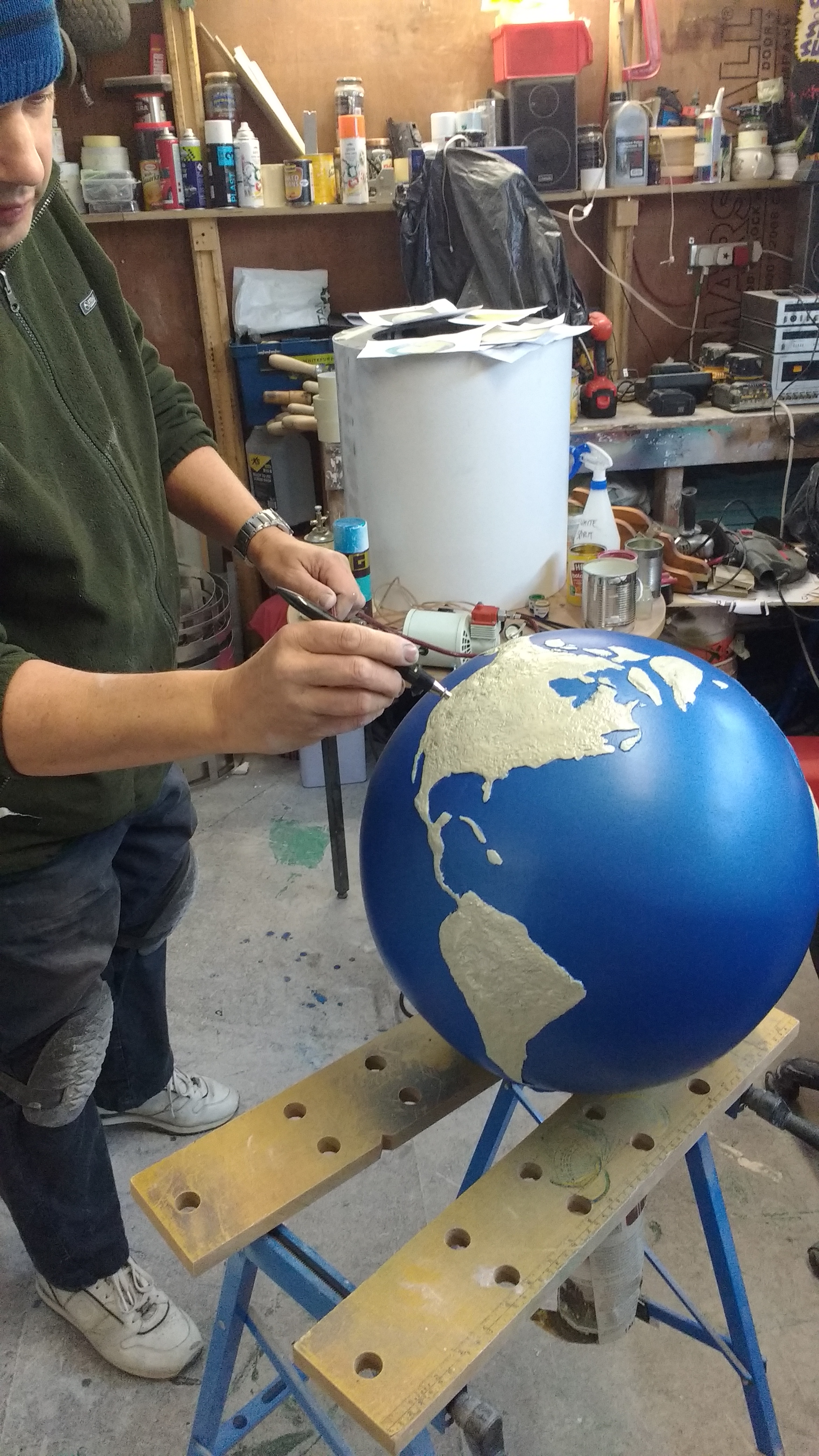 Now that the YuStart campaign is over, we just wanted to say a huge thank you to every single one of you that has donated, shared the page or helped us along the way so far. It's really bowled us over the response that we've had - so thank you!

The ground work for the plinths is now in full swing - the picture below might not seem like much at first glance, but it was very exciting for us! This is the very first work being done to install the footings for the planets on campus, this being the site of Jupiter just outside the Physics department and YUSU. After many months of planning, design and manufacture it's exciting to see things really start to take shape! 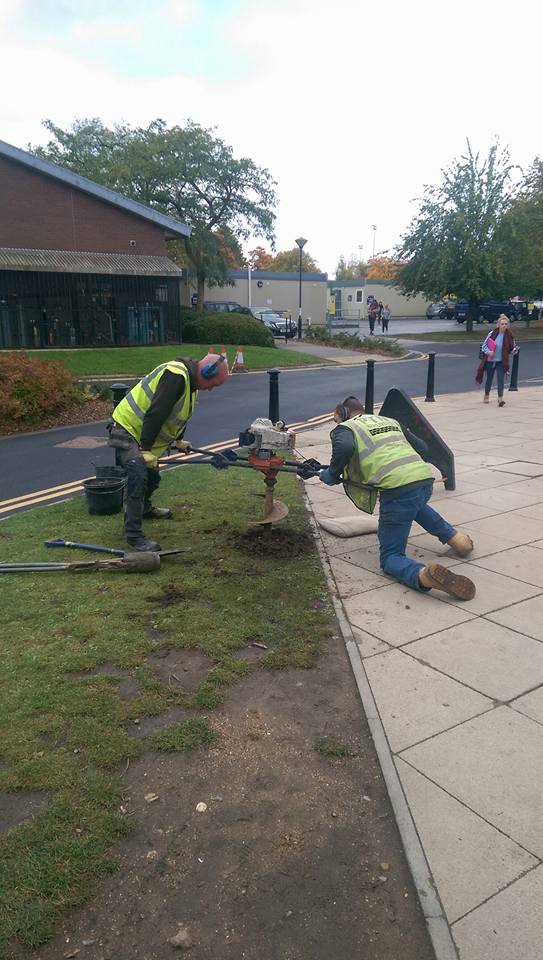 Similarly, the wonderful Mark Bentley has finished making all the parts for the plinths and they have now moved over to the physics workshops to be anodised. Here is a little snap of his fantastic work! 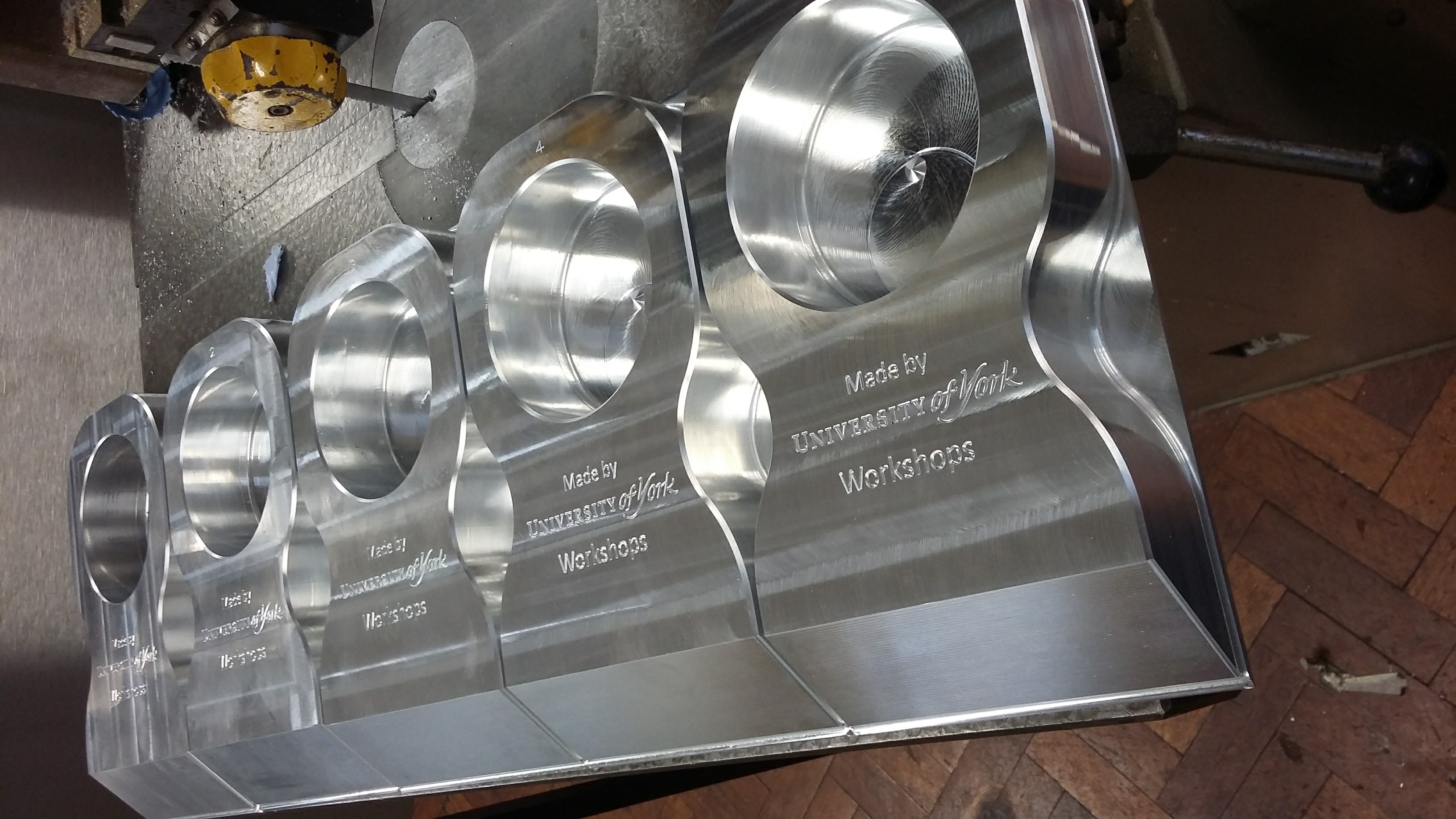 The soft opening of the model is scheduled for the first weekend in November, with an official opening party happening two weeks later - so we will be in touch with you all in due course to invite you to that, as well as to thank you personally for your help - and to organise sending out your rewards!

A quick update on our project as we head towards the end of the crowdfunding campaign!

Our planets are now all sculpted, cast and ready to be painted! Below is the mould of planet Earth last week, almost ready to be cast! 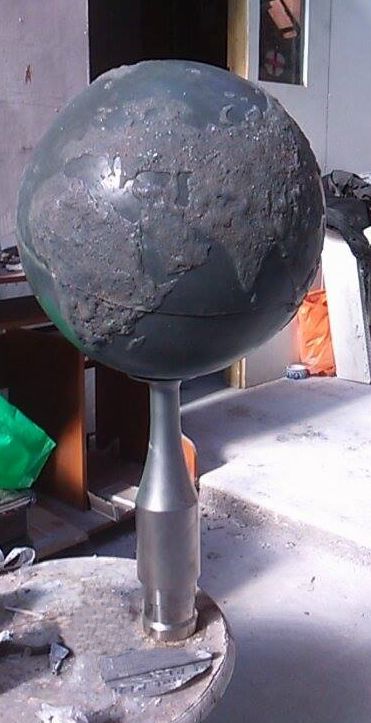 And below is a close up of the north pole of Dwarf Planet Pluto (before painting!), which will be the furthest body on our solar system model, sitting in Constantine college in Campus East! 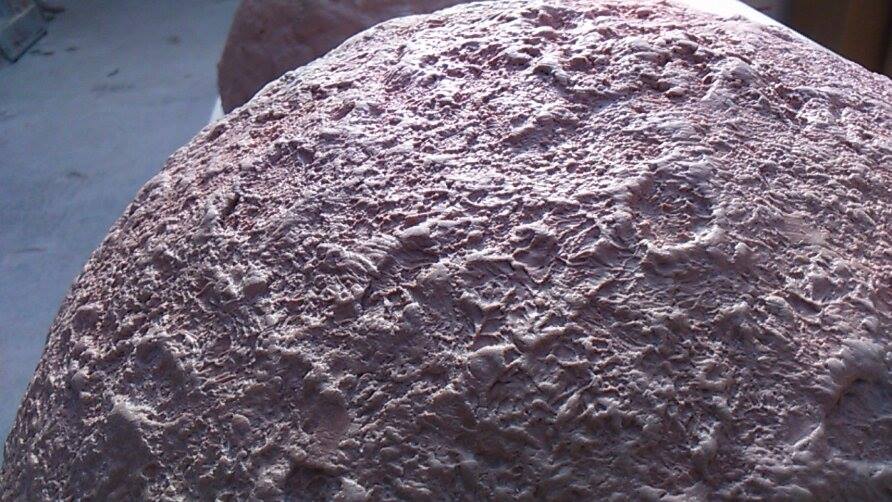 Over the next week, the planets will all receive a coat of paint (many coats of paint!) before being transported to York where they will be installed onto the plinths, which are currently having their finishing touches in the workshops!

The final step before installation will be to etch the plaques with details of each planet, as well as our kind donors - a process that will take place late next week!

The planets will then be ready for installation across campus in the final week of October! At the same time we will be printing up flyers and maps and readying a website - all in time for the grand opening of the University of York Solar System on Sunday 6th November!

We'll be updating with further sneak peaks of the planets as everything comes together over the coming weeks, as well as more details on the grand opening itself!

Thank you again to everyone who has donated and helped us get to where we are so far on this project - everyone has put so much into this and we're incredibly grateful!

Our production on the University of York Solar System continues with vigour, with the manufacture of the plinths nearing completion thanks to sterling efforts from our friend Mark Bentley in the Biology workshops!

Below are a couple of pictures of the pieces, coming together nicely! 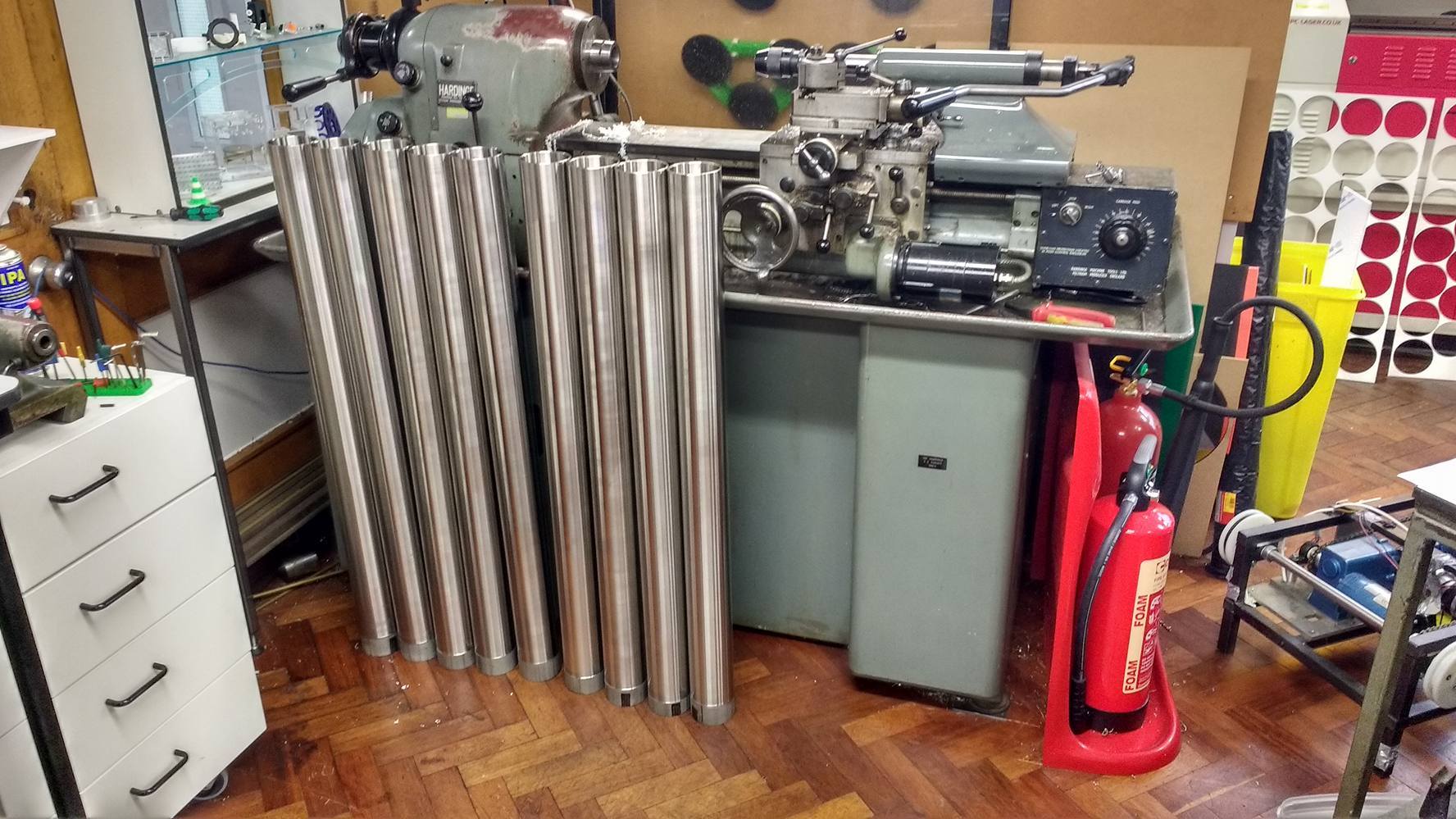 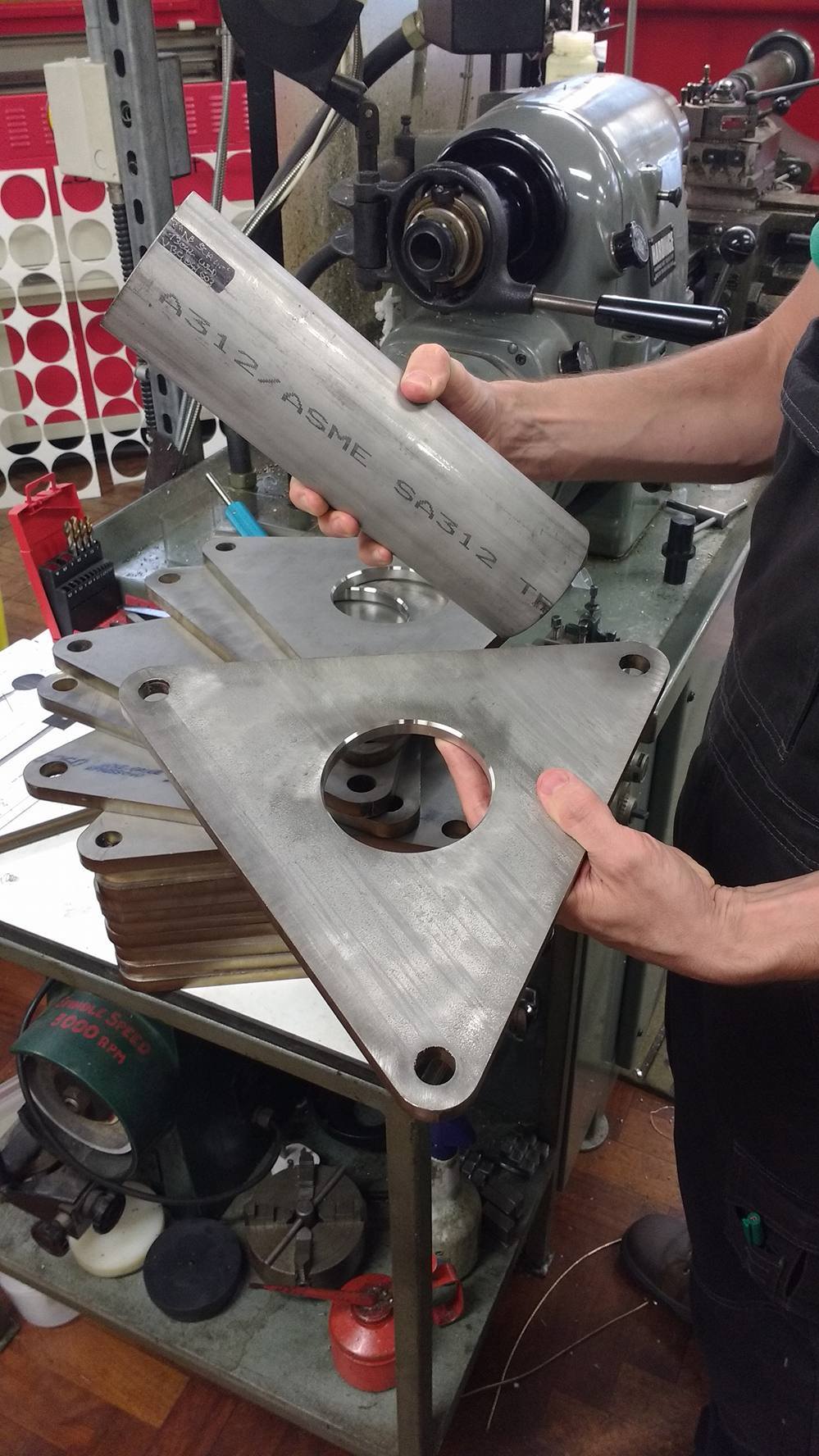 And just so you can get an idea of how it all fits together, here is the schematic diagram of the final design! 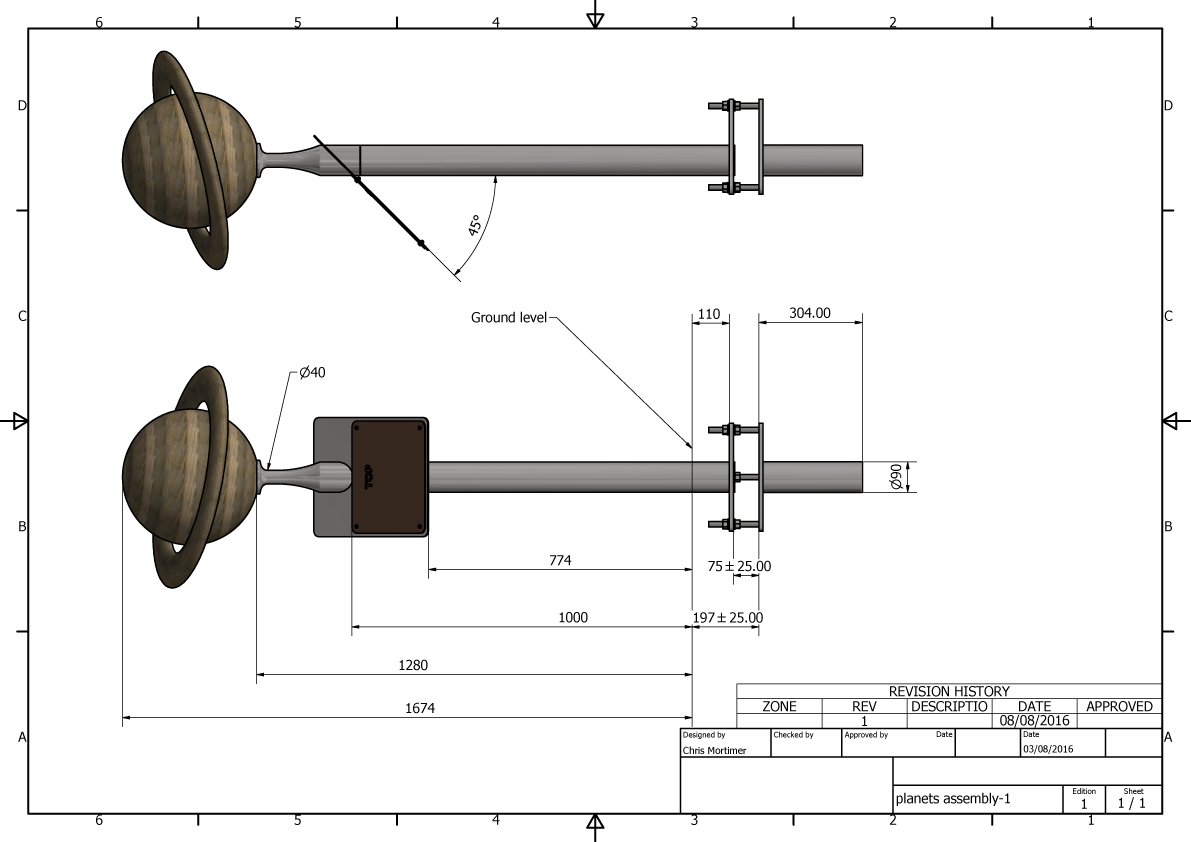 Aside from this, we're now working on the grand opening of the project, slated for the first weekend in November - which means that we will have all the planets installed at the end of October!

So we're now well into our production schedule on the Solar System Model! Manufacturing is taking place at two separate sites, with the awesome folks in the Chemistry Dept workshops putting together the stainless steel plinths. At the same time we've got a fabulous team of artists over in Scarborough sculpting the planets themselves!

Below is a photo of Planet Earth in its early stages of manufacturing. The two hemispheres of the planet have come together and are attached to the stainless steel column at the bottom. After this, the sculptor will spend countless hours hand sculpting the continents onto the surface before it is and shipped over to York ready for installation on campus! 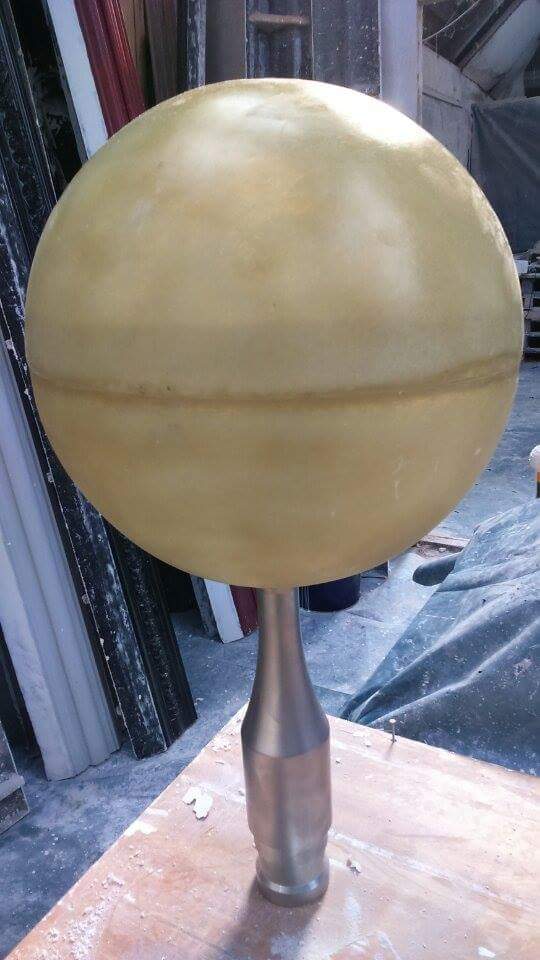 We'll add more updates and photos over the coming weeks to show in more detail the steps involved in sculpting the planets! We've also had discussions with the University of York groundsmen on the final positions for the planets, so we'll send out an updated map soon!

Thanks to ALL who have donated so far, we are incredibly grateful for your help and we can't wait to meet you all when the model is installed on campus!

A special thank you on our dedicate website sponsors page

A special thank you in our promotional leaflets!

A signed print of original Solar System artwork and a special thank you in our promo flyer!

An invite to a dedicated stargazing evening at the University of York Astrocampus for you and a friend.

VIP tickets to the grand opening including entrance to a lecture and a personalised tour of the route! Please note that accommodation is not included in the prize! The grand opening will likely take place on the first weekend in November!

Own a planet. You will have your name on one of the planet plaques as an official sponsor of the project! n.b. Due to our manufacturing schedule if you wish to receive this reward please give before September 20. Any sponsors giving at this level after September 20 will not have their name on a planet plaque.