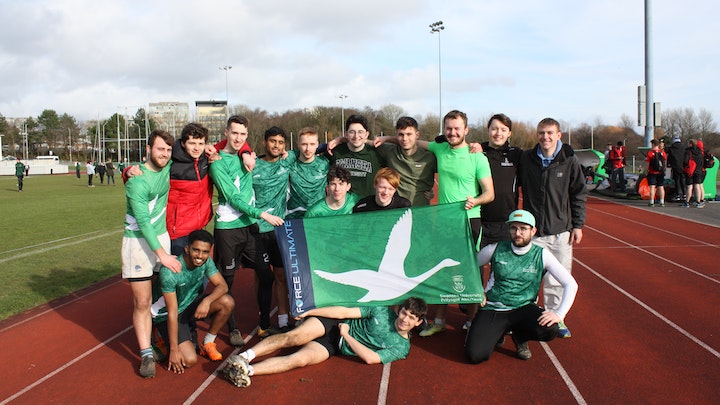 What are we funding?

We are raising money to send both our Men’s 1st team and Men’s 2nd team to Outdoor Nationals.

Our Men’s 1st team will be competing in Division Two and our Men’s 2nd team will be competing in Division Three. Last year the Men’s 1st team finished in 3rd place in Division Two, earning themselves bronze medals, ranking them at the 19th best male university outdoor team in the UK, and they are hoping to repeat their successful performance this year. The Men’s 2nd team have had a record-breaking performance this season, winning all of their cup ties, and therefore qualifying for Division Three outdoor nationals. This is the first time Swansea University Ultimate Frisbee has sent a second team to outdoor nationals, so the second team has already had a record best season of all time. With a few more league fixtures between now and outdoor nationals, we are hoping that they can maintain their great form up to and throughout nationals. Outdoor nationals is taking place in Nottingham, so the transport and accommodation costs have increased for the club this year, due to the increased number of players we will be taking.

Swansea University Ultimate is a student-run sports club at the University which aims to be inclusive to all, as well as highly competitive within the various BUCS leagues we enter and all of the UK Ultimate tournaments we enter each year. We have been a sports club for over 15 years and represent Swansea annually at Varsity. Within recent years we have broken several club records, which include a third-place finish for the men’s outdoor first-team at division two outdoor nationals, and the women’s outdoor team qualifying for division one outdoor nationals. We also have strong development teams and have regular socials and an annual trip to Italy to play beach ultimate. Thanks to the efforts of the students on each year’s committees and all of the players, we have put Swansea and South Wales on the map as a force to be reckoned with, with many of our graduates going on to have success on both the national and international club level.

The men’s second team are currently having their record best season and are looking to make their mark at nationals for the first time, and the men’s first team have consistently challenged the top of division two outdoor nationals. We are looking to continue getting great results and developing great players at high level tournaments such as outdoor nationals. Due to financial hardship, the club can’t take the squads to outdoor nationals without support, and runs the risk of being faced with a fine for not sending the teams.

Finances aside, it is a great chance to further put Swansea on the map as one of the top university teams in the UK, and to earn Swansea some more BUCS points. It is also a great chance for our players to showcase how much effort they have put into this season, and how advanced they have become, thanks to extensive training sessions both on and off the pitch throughout the year.

The men's teams in action:

Receive a thank you message from us, and a shoutout in a club social media post of thanks!

Get mentioned in a club promotional video!

We will feature you / your company logo on our social media platforms!